Vadim Farrell is a Hungarian model who comes from a small-town, blue-collar family. After more than a year of filming, G. Duroy feels Vadim finally learned to relax and blossomed into a first-class model. (His surname comes from the actor Colin Farrell, as you might guess.) He is athletic with a beautiful face, bright blue eyes and sensual lips, and a big d**k. George is fond of recalling that when he and Vadim first met he said, with complete sincerity, “I always knew I would be making money with my good looks.”

Vadim ultimately decided to move to Budapest early in 2010 and became much more available to Bel Ami. “He has a beautiful, round, bubble-butt and believe me, bottoming does not hurt him at all,” George says. “Originally, he had it stuck in his head that bottoming was too passive and feminine for a man. ‘It hurts my pride,’ he would tell me.” However, after his pride had been wounded even more in his hometown, George learned this issue about bottoming would not be an issue now that he needed to earn more money to live. Vadim’s fantastic physique makes him quite popular among those customers who appreciate muscle.

#TowelTuesday -- Nearly nude Nyle DiMarco's indecent exposure
Maximilijano in tight white undies in his first photo shoot
Raymon Fist takes off his briefs for photographer Dani Piedrabuena
#TowelTuesday -- Model Craig Messick under wraps by Kevin McDermott
Jean-Claude Van Damme's "Body of Work"
Carlitos spends #TowelTuesday at a nude beach during the magic hour
Andy Catlin takes off his underwear for Stevan Reyes
Personal trainer Dan Rockwell for Aronik swimwear
A long time ago in a galaxy not so far away... a young Harrison Ford made us very very thirsty!
#FullFrontalFriday -- Nudie cutie Justin Owen has something to show you
#AssWednesday -- Andrew Adorno butt naked in the basement
#TowelTuesday -- Michiel Huisman by Mario Testino 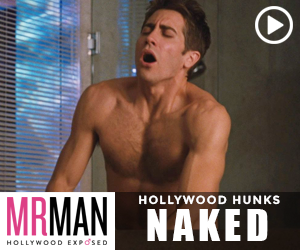